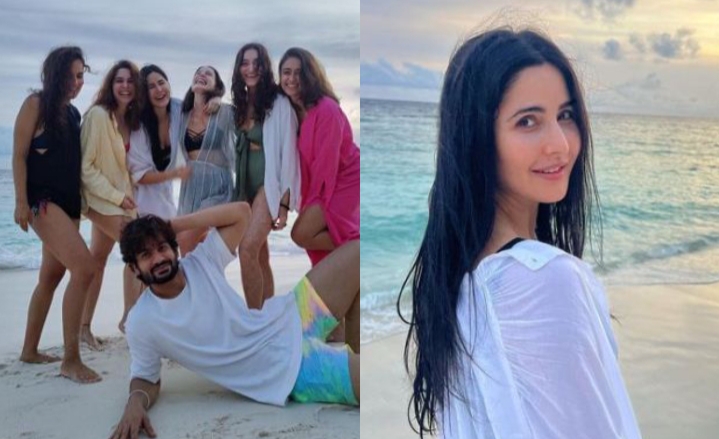 Katrina Kaif has celebrated her first birthday after marriage in a special way in Maldives. This birthday of Katrina is also special because this time Vicky Kaushal is with her. Katrina Kaif has shared some special pictures of her birthday celebration with fans on social media. In these pictures, Katrina is seen wearing a white transparent shirt over a bikini. View photos.

In the viral pictures of Katrina Kaif, you can see Katrina with her brother-in-law and actor Sunny Kaushal. At the same time, Girlgang was also seen with him. But Vicky Kaushal is not visible.

Vicky Kaushal had left for Maldives a day earlier to celebrate Katrina’s birthday with Katrina Kaif, brother Sunny Kaushal and some close people. Now Katrina herself has shared the inside photos of the birthday celebrations on her social media account Instagram. In these pictures, Katrina is seen wearing a transparent white color shirt over a black bikini.

Katrina has celebrated her first birthday after marriage on the beach in Maldives. In the pictures that surfaced, Vicky was not seen with Katrina but the actress was seen posing in a bikini with the girl gang.

Sharing these pictures of her, Katrina Kaif wrote in the caption ‘Birthday wala day.’ As soon as Katrina posted these pictures on social media, fans and celebs started wishing her a happy birthday.

On the other hand, Vicky Kaushal shared the middle photo of the actress and congratulated her birthday in a special way. Vicky Kaushal wrote- ‘Time and time again these days come, again and again the hearts sang. Happy birthday my love.’