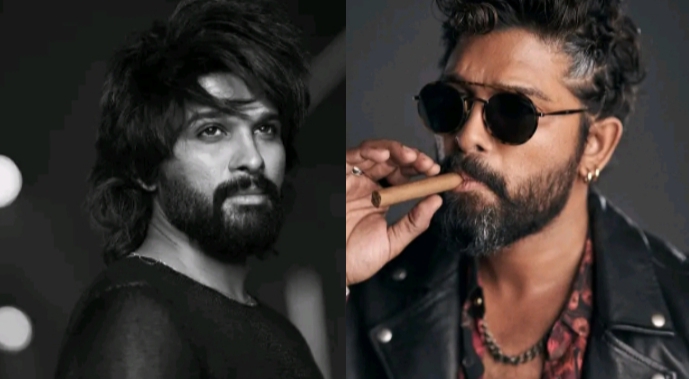 South’s stylish superstar Allu Arjun rules millions of hearts with his acting as well as his style. Allu’s swag, people are crazy about dance moves. In the film ‘Pushpa the Rise’ released earlier this year, the style of Allu (Allu Arjun) was very much enjoyed by his dance moves. This movie proved to be a blockbuster the movie. At the same time, movie lovers are eagerly waiting for the second part of Pushpa. In such a situation, a good news has come out for the fans about the film. The good news is that the latest look of Allu Arjun from the film has gone viral.

Allu’s look revealed:
At present, the sequel of ‘Pushpa the Rise’ is in a lot of discussion these days. In such a situation, the look of Allu Arjun from the sequel of the most awaited film ‘Pushpa the Rise’ is becoming very viral these days. In these pictures, Allu Arjun is seen holding a leather jacket, black eyewear and a cigar. Allu Arjun has shared this picture on his social media handle. Sharing the picture, he wrote in the caption, ‘Caution: Smoking cigars is very injurious to health.’

Allu Arjun’s fans and fans are very fond of this picture. Users are presenting their own reaction on this picture. One user wrote, ‘Just like Vikram sir’, another wrote, ‘Stylish iconic star’, the third wrote, ‘Real pan India star’. All such users have presented his own feedback.

Film preparation:
Let us tell you, Allu Arjun is currently busy shooting for his upcoming film ‘Pushpa 2’. It is expected that director Sukumar’s film ‘Pushpa 2’ can be released early next year. Apart from this, soon Allu Arjun will be seen in the film ‘AA21’ with actress Pooja Hegde .